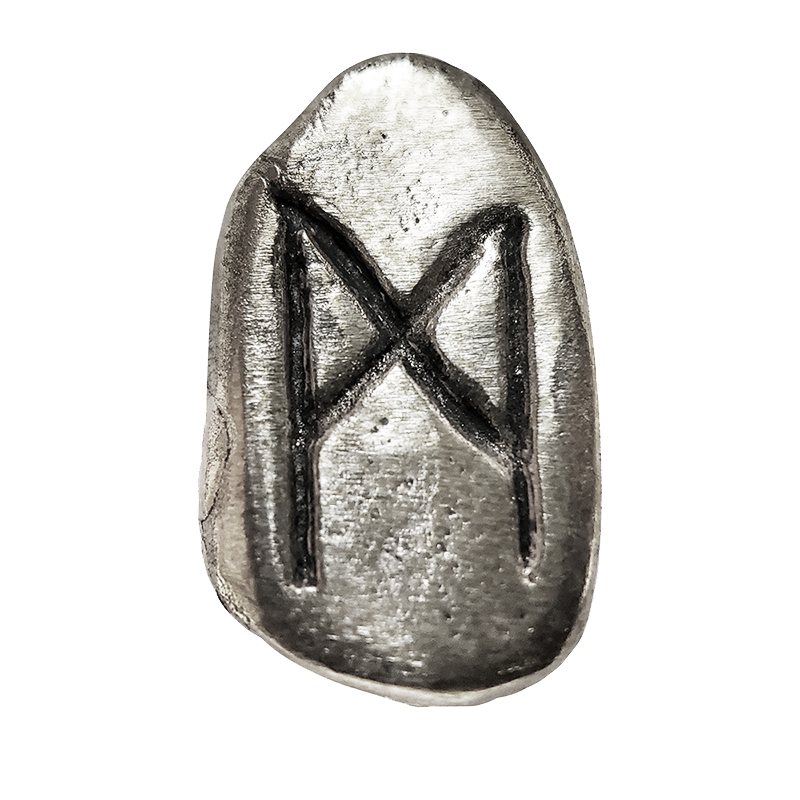 The Mannaz Rune symbolizes the gateway to joy. It is a great stone of light and goodness. It is a positive sign, and you can trust it. If you pick Mannaz, it demonstrates that you have confidence to pass through the gateway and happiness will follow. This Rune symbolizes a passing through a channel or tunnel of happiness. Be careful not to immerse yourself in the happiness – remember to keep balanced.

If you are unable to see the joyful gateway, it is because you are afraid. It is our fears and inadequacies that hold us back from fulfilling our dreams.

Never be afraid to be happy. Look at this stone again…if you cut it straight down the middle you get the Rune Wunjo, which means joy. Joy always means light; you cannot have happiness in the dark (metaphorically speaking).

Mannaz is offering you a double dose. Have the courage, take that great step forward. 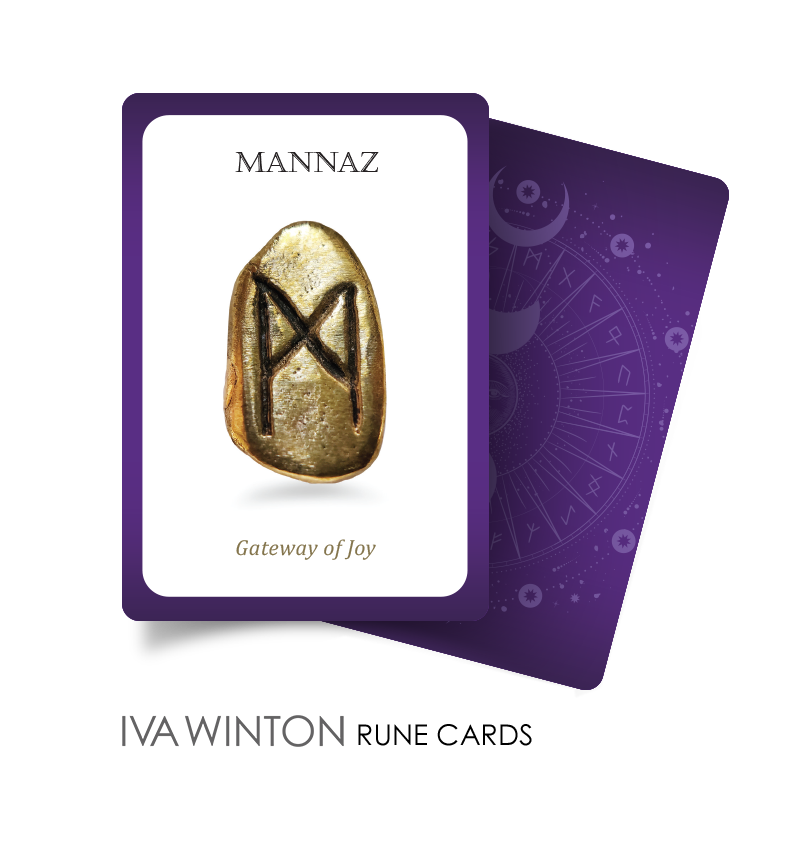 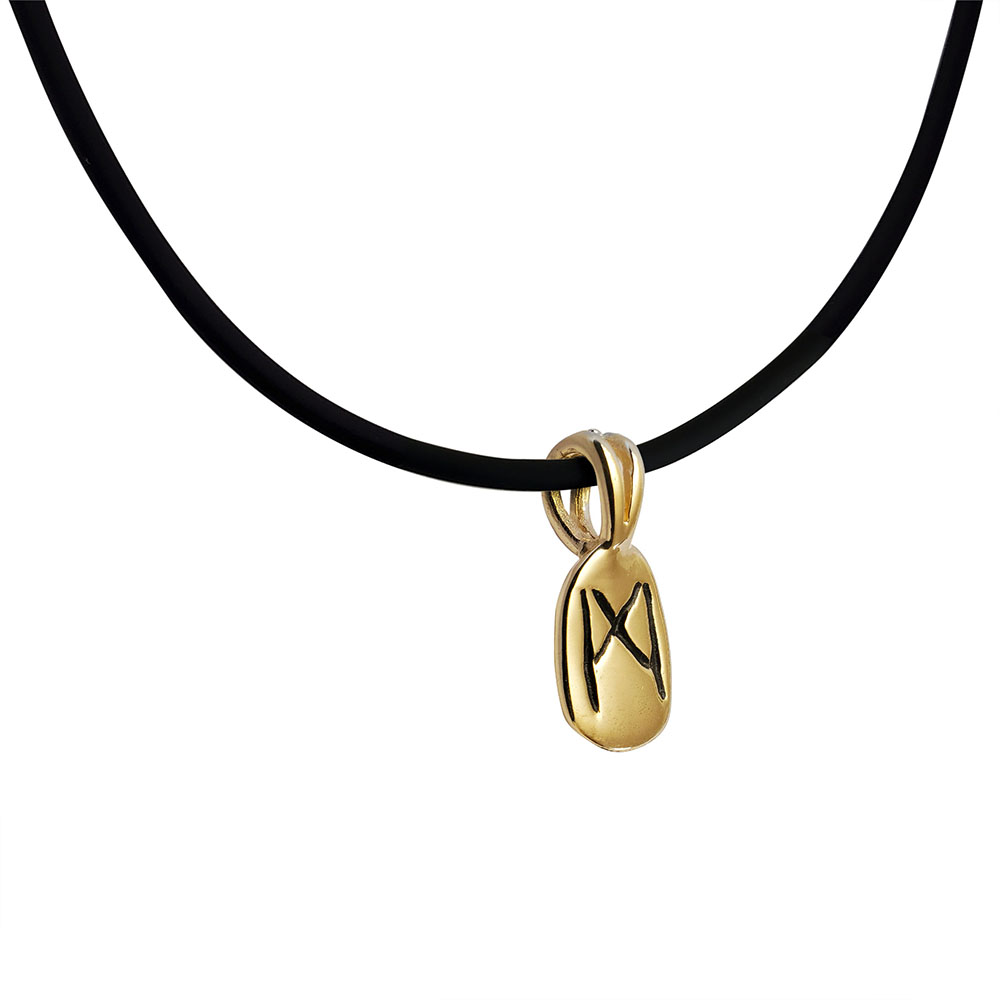 Traditionally, Mannaz is the conventional name of the m–rune ᛗ of the Elder Futhark. It is derived from the reconstructed Common Germanic word for “man”, mannaz.

Younger Futhark ᛘ is maðr (“man”). It took up the shape of the algiz rune ᛉ, replacing Elder Futhark ᛗ.

As its sound value and form in the Elder Futhark indicate, it is derived from the letter M (𐌌) in the Old Italic alphabets, ultimately from the Greek letter Mu (Μ). *** source Wikipedia ” Mannaz” ***

The Mannaz Rune has many meanings to the one casting the runes. As you continue to cast your own runes, you will see that each symbol will carry it’s own special meaning to you. Furthermore, here are some other popular Mannaz Rune meanings.

Mannaz Rune Meaning according to Ralph Blum – “The Self”

Blum believes the Mannaz Rune symbolizes “The Self”, the starting point. He writes “From a correct relationship to yourself comes a right relationship to all others and to the Divine”. – Ralph Blum “The New Book of Runes“

Rune of the Divine structure of intelligence in the human soul or psyche. Rune of the horizons of human existence and collective potential. – From the Rune Secrets

This is the ‘Rune of Mankind’ – the Human. It is said to represent the ‘perfect human’, regardless of gender. This belief appears to be based on the thought that we are all genetically linked to the gods and the universe. This rune represents the human as a whole, incorporating the intelligence, memory, rationality, common sense, traditions and cultures of the human race. It represents our ‘humanity’. – From The Elder Futhark Runes

There are many ways to cast The Runes. They are here to help you find your inner truths, your intuition, your sixth sense. The more you use them, the more they will become a comfort to you. Think of them as your best friend or guardian angel. The message from the Runes is always simple and clear. Learn how to cast Runes in Iva’s new book Be Your Own Psychic Through Rune Casting, you can purchase my book and Rune Card Set.

“I have asked pertinent questions and the Runes have given interesting, but appropriate answers. The answers fit with where I sense my life is at this time.” – Student of Iva Winton’s Rune Circle Course